In node.js, REPL is a run-time environment and it is similar to Shell or command prompt in Linux or Windows machines. The REPL stands for Read-Eval-Print-Loop and it is very useful when we want to test a simple JavaScript or node.js code snippets.

Suppose, if we install a node.js in our machine, then automatically the REPL runtime environment also get installed because by default the node.js will contain a REPL module and it is also called as “Nodejs Interactive Window”.

Generally, REPL is a short form for the collection of four different types such as Read-Eval-Print-Loop and the following table will describe more about each type in detail.

What is the use of Node.js REPL?

To create command-line applications using node.js REPL shell, search for node.js in windows and click on Node.js desktop app like as shown below. 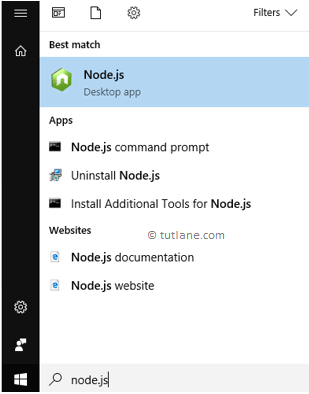 In case, if you want to open a node shell in Linux / Mac, open terminal and just type node. After opening Node.js command-line interface, type “Hello World” command in console and click on enter button that will show the output like as shown below.

If you observe above result, we tried to print a message in node.js shell by typing a message “Hello World”. After we type a message and click on Enter, it returned the string whatever we mentioned in terminal.

Now, let’s try to concat different strings by using + operator like as shown below.

In node.js repl terminal, we can perform arithmetic operations based on our requirements. Suppose, if I type 50 + 60 it will return the result as 110.

The following are some of the examples to perform an arithmetic operations in node.js REPL terminal. 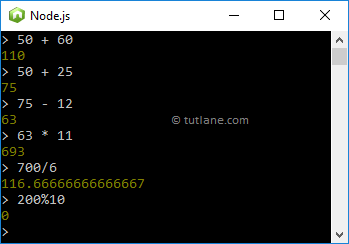 If you observe above result, we are able to perform arithmetic operations in node.js REPL terminal based on our requirements.

Use Variable in Node.js REPL

In node.js REPL, we can define the variables and perform a required operations same like JavaScript.

The following are some of the examples to create and perform a different operations on variables in node.js REPL terminal. 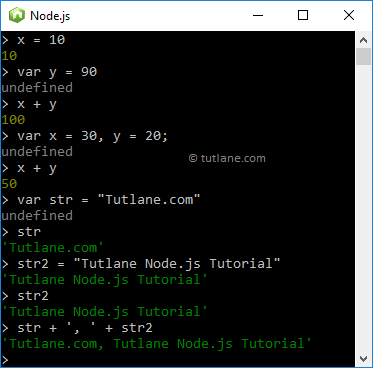 If you observe, we are getting an undefined value for the variables which we defined with var keyword when we click on Enter key it’s because if we perform any action in node.js, then we need to return a value. In case, if we don’t return any value, then it will show undefined as result.

Same like JavaScript, the node.js REPL also will support multiline expressions. In node.js REPL, if you want to write a multiline JavaScript expressions, then just press Enter whenever you want to write something in the next line as a continuation of your code. The REPL terminal will display three dots (…), it means you can continue on the next line.

Following is the example of defining a function with multiline expressions in node.js REPL terminal.

If you observe above result, the REPL terminal has displayed three dots (…) whenever we press Enter to write something in the next line as a continuation of our code.

This is how we can use multiline expressions in node.js REPL terminal based on our requirements.

To work easily with the REPL shell or terminal following table lists some of the important REPL commands.

If you want to stop or exit from node.js REPL terminal, then you need to press CTRL + C twice or write .exist and press Enter like as shown below.

This is how we can use node.js REPL (Read-Eval-Print-Loop) terminal to test a simple JavaScript or node.js code snippets based on our requirements.