The following are different ways to debug node.js applications.

Here, inspect is an argument to enable debugging and script_file_name.js is the path of a script file which we want to debug.

Following is the example of enabling a debugger for simpleisexample.js script file which we created in a previous node.js NPM article.

When we execute the above statement, we will get a successful launch of the debugger and the debugging will always start from the starting point of the script like as shown below.

If you observe the above image, we have a greater than (>) symbol to indicate the current debugging statement.

Now, we can continue the script file debugging in node.js by using following commands.

Following is the example of moving the debugging to the next statement using next command in node.js.

This is how we can debug the code in node.js using built-in debugging client.

Actually, the node.js debugging client is not a full-featured debugger and the code debugging will always start from the starting of the script. In case, if we want to debug from the specific position of code statements, then it’s better to use debugger statement.

By inserting debugger; statement in the source code of script will enable a breakpoint at the specified position of code.

Now, create a script file called mathoperations.js and write the code like as shown following with debugger; statement.

If you observe above code, we are performing some arithmetic operations and added a debugger; statement to enable the breakpoint at required position of code.

Now, to enable the debugging for the above application, run the following command.

Once we execute the above command, the debugger will start and stops at the first line of the code like as shown below.

If you observe the above image, we have a greater than (>) symbol to indicate the current debugging statement.

Now, use cont or c statement to stop the execution directly at the position where we defined a debugger; statement like as shown below.

If you observe the above image after we execute cont statement the execution has stopped at the position where defined a debugger; statement.

This is how we can move the debugging to the next line of code in node.js based on our requirements.

In node.js, we can watch the expression and variable values while debugging using watch('expression') & watchers commands. On every breakpoint, the expressions in the watcher's list will be evaluated in the current context and displayed immediately before the breakpoint’s source code listing.

Following is the example of using watch command to add variables to an active watchers list. 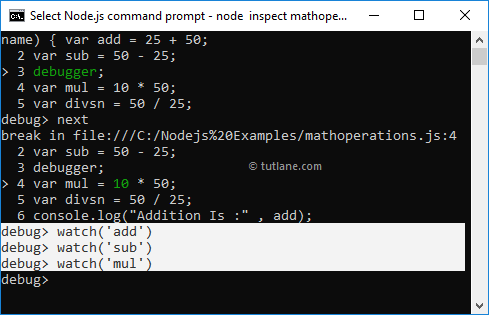 If you observe the above example, we added three variables (add, sub, mul) to the watcher's list by using watch command. 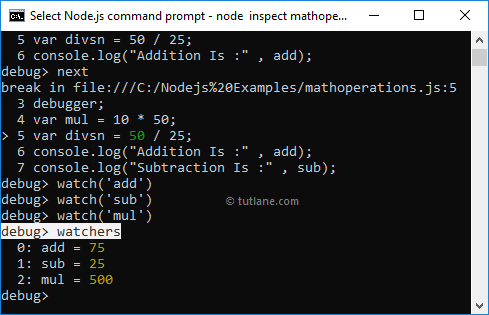 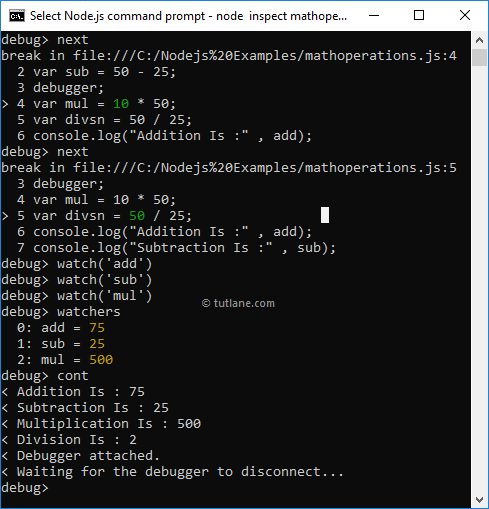 If you observe the above result, the code execution has been completed because we didn’t mention any other debugger; statements in our code except at line 3.

Once we are done with the debugging tasks and if we want to exit from debug mode, then we need to use a .exit command like as shown below.

This is how we can do the debugging in node.js to cross verify the functionality of node.js applications based on our requirements.

In the next chapters, we will learn how to use the Node Inspector to debug the node.js applications.