In iOS storyboard is used to design the user interface of an application. By using storyboard, we can compose multiple sequence of scenes and each scene will represent as a view controller. Here scene means application content area.

In the storyboard, if we can connect multiple scenes by using segue objects, here segue means the transition between two view controllers. Generally, the Xcode editor will provide a visual interface for storyboard and that will be like as shown below. 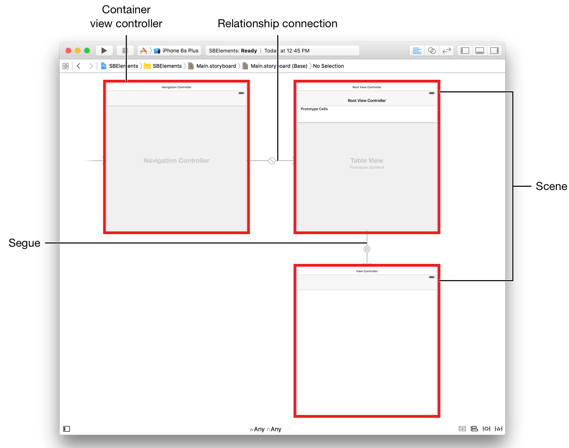 In storyboard by adding user interface controls such as buttons, labels, image view, table view, text fields, etc. we can design view of application and connect our user interface views to controllers easily.

Now we will create a simple iOS application to know more about StoryBoard with example. 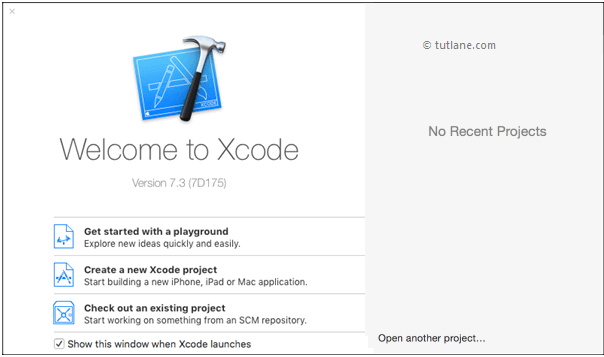 After selecting “Create a new Xcode project” a new window will open in that we need to choose a template. 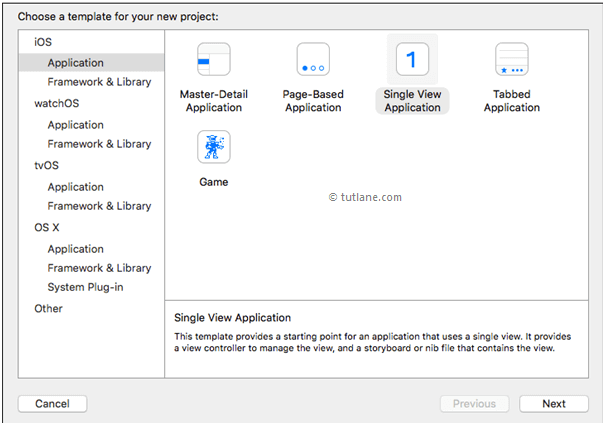 After click Next we will get a window like as shown below. In this, we need to mention the project name and other details for our application.

The name whatever we enter in the Product Name section will be used for the project and app.

You can enter the name of your organization or your own name or you can leave it as blank.

Bundle Identifier: This value will generate automatically based on the values we entered in the Product Name and Organization Identifier.

Select language type as “Swift” because we are going to develop applications using swift.

Choose Devices options as Universal it means that one application is for all Apple devices in case if you have any specific requirement to run an app only for iPad then you can choose the iPad option to make your application restricted to run only on iPad devices.

This option is used for database operations. In case if you have any database related operations in your application select this option otherwise unselect the option.

In case if you need unit tests for your application then select this option otherwise unselect it.

In case if you need UI tests for your application then select this option otherwise unselect it.

Once you finished entering all the options then click on the Next button like as shown below. 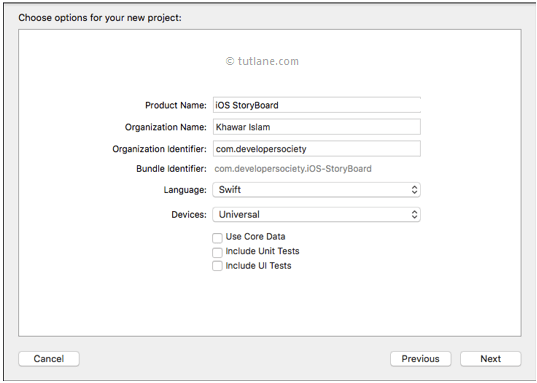 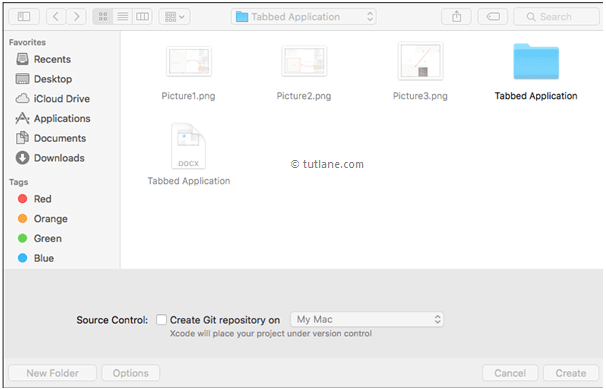 After clicking on the Create button, the Xcode will create and open a new project. In our project, Main.storyboard and ViewController.swift are the main files that we used to design the app user interface and to maintain source code.

Main.storyboard - Its visual interface editor and we will use this file to design our app user interface

ViewController.swift - It contains the source code of our application and we use this file to write any code related to our app.

If you want to access your user interface portion you want to go at Main.storyboard file and you will see the controller is appearing basically this is a screen of your iPhone. 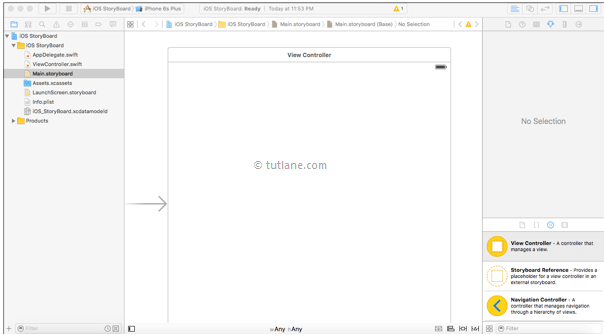 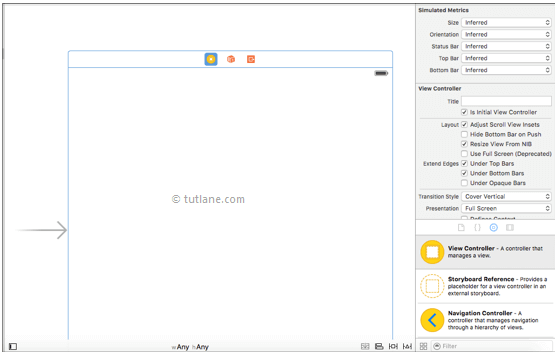 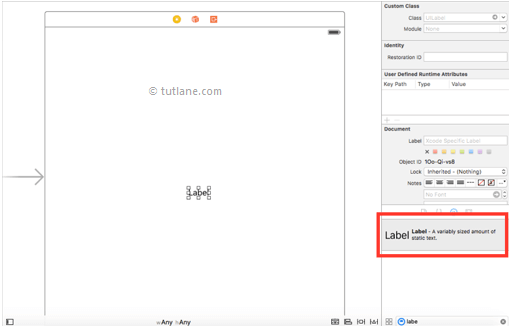 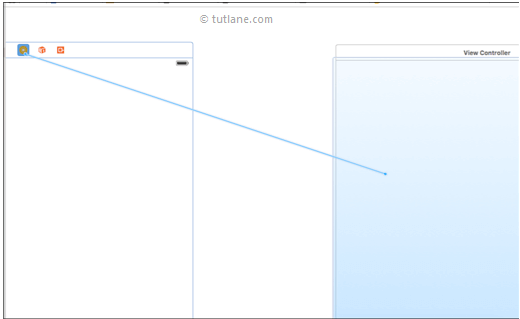 The connection between two View Controller is called “Segue” which will be marked with image and you can perform any type of function using this “Segue”. 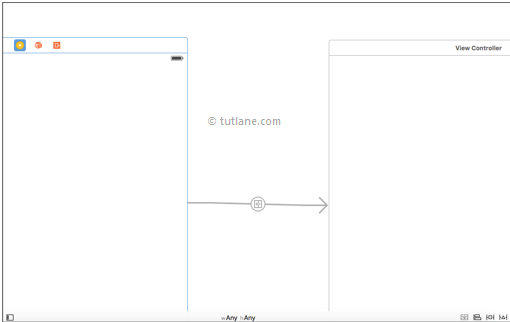 We will see how to use a storyboard file in our application with one simple example.

Now we will add controls to our application for that open Object Library. The Object Library will appear at the bottom of Xcode on the right side. In case if you don't find Object library, click on the button which is in the third position from the left in the library selector bar like as shown below. (Alternatively, you can choose View à Utilities à Show Object Library.) 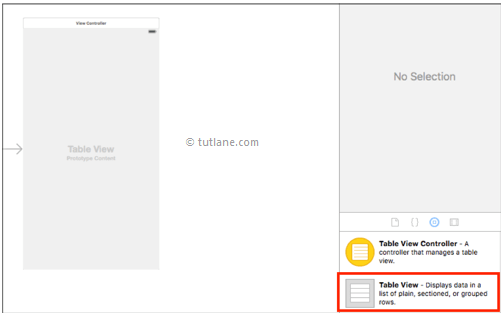 Now click on table view and you see that in Prototype cells the textbox is zero give it here “1” and style should be “Grouped” like as shown below.

Now we will add images to our assets folder for that select the images drag and drop into the left side assets folder in our application like as shown below. 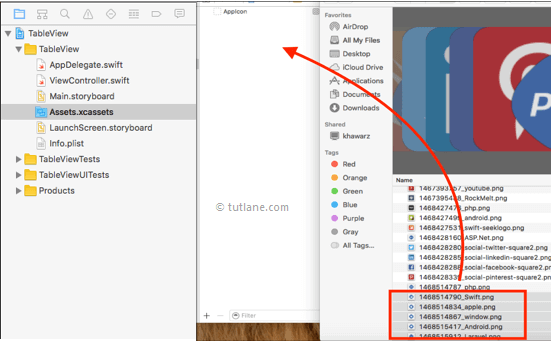 For the implementation of Table View move to the ViewController. Swift file first adds the two classes which are UITABLEVIEWDATASOURCE  and UITABLEVIEWDELEGATE make an array with name devCourses using let keyword which will show in a table view. let keyword is basically the constant keyword it is mean that the value can’t be changed after the declaration and the second array devCousesImages is for images and it contains the name of the image which is in assets folder.

Now move to Main.storyboard file and drag the label and image view and drop into the table View cell like as shown below. 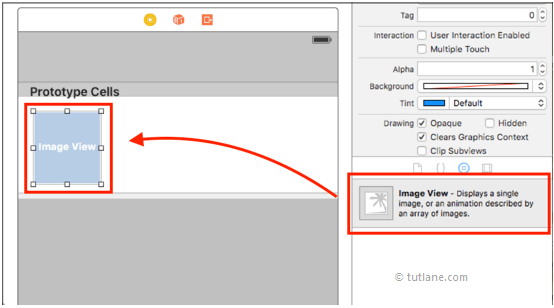 Now we will add a new file in our ios tableview applications for that go to the File à click on New à click on file button like as shown below. 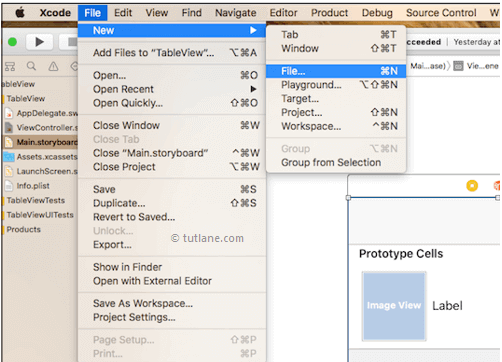 Once we click File new templates section will open in that choose the “Cocoa Touch Class” and then click on the next button like as shown below. 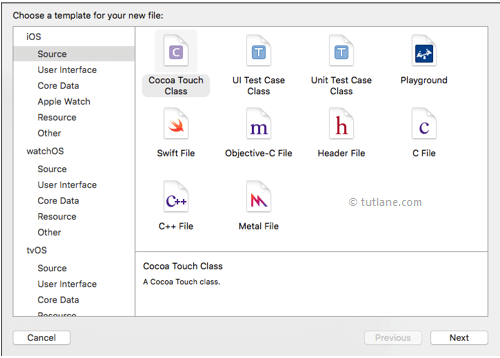 Give the class name and extend with subclass “UITableViewCell” and set the language swift the purpose of creating this class is to make our own cell to show the image on top that we drag and drop the label and image view. 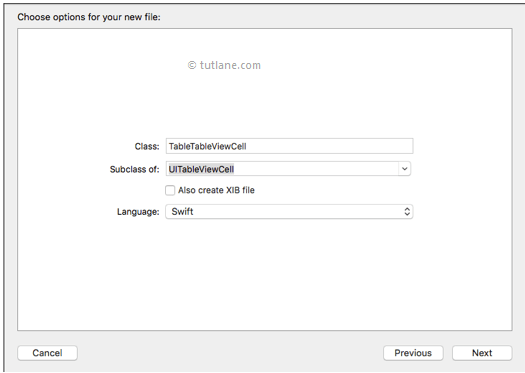 Now click on the cell and assign the class which we created and remember that the name of the class should be the same otherwise our label and image view will not connect with the class.

Now we will make a connection between controls and ViewController.Swift code for that click on the assistant button (overlap circle) in Xcode toolbar right side corner like as shown below.

To map the controls, press the Ctrl button in keyboard and drag the Image View from canvas interface and drop into TableTableViewCell file the same way map label control also like as shown below.

Now click on the cell and give its identifier name as a cell. Here you are not restricted to give name as “cell” if you want to give your own name also based on your requirements.

Now our task is to show the data in the table view for that we have three methods that are mandatory to implement in Table View those are given below.

The first method is “numberOfSectionsInTableView” by using this method we can return a number of sections required in our applications. Present we need only one section so we are returning only 1.

Now second method is “tableView” here we need to define number of row sections which we need show in table view.

Now the third method is “tableView” with “cellForRowAtIndexPath” basically this is the method where we assign array data to label in our Table View cells. Our method need to be like as shown below. 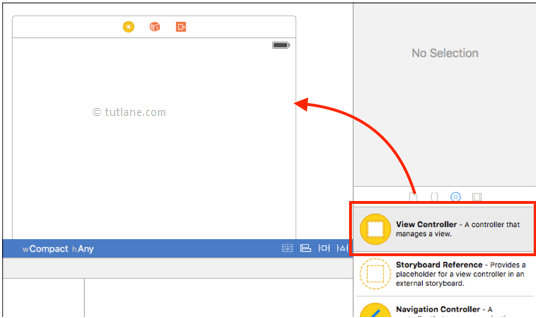 Now click on first ViewController which is having table view and go to the Editor à then click on Embed In à then add the Navigation Controller now you have three ViewControllers. 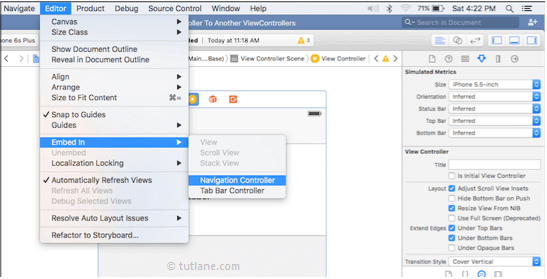 Give the class name and extend with subclass “UIViewController” and set the Language type swift like as shown below. The purpose of creating this class is to pass the data from tableview cell to another ViewController. 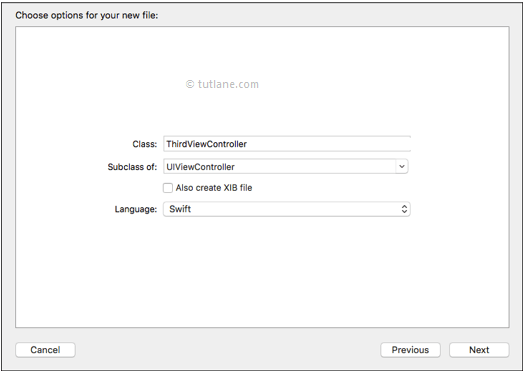 Now, go to the Main.storyboard section and click on Third View Controller and assign the class which is created now called “ThirdViewController”. 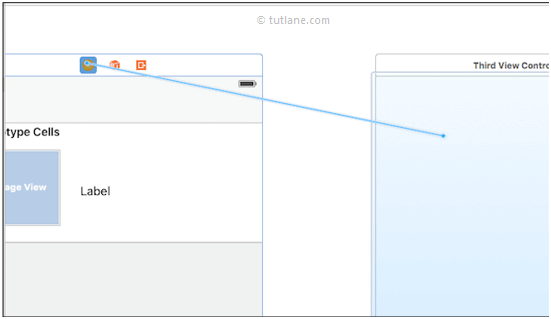 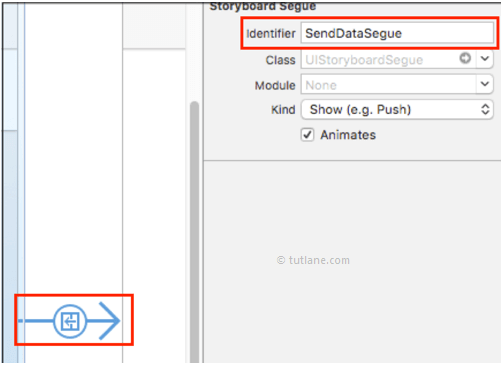 Now we will make a connection between label and imageview controls to ThirdViewController.swift file code for that click on the assistant button (overlap circle) in Xcode toolbar right side corner like as shown below. To map the controls, press the Ctrl button in keyboard and drag the Image View from canvas interface and drop into ThirdViewController file same way map label control also like as shown below

Once we did all the settings we need to write custom code to show image and image details in Third ViewController. Our ThirdViewController.swift file should contain code like as shown below.

Our main ViewController.swift file will contain code like as shown below.

// Dispose of any resources that can be recreated.

Now we will run and check the output of application. To run application, select the required simulator (Here we selected iPhone 6s Plus) and click on Play button, located at the top-left corner of the Xcode toolbar like as shown below.

Following is the result of iOS storyboards application. If you observe we are showing table view data with images as a single-column list with multiple row sections once we click on table view cell that information passed to another viewcontroller like as shown below. 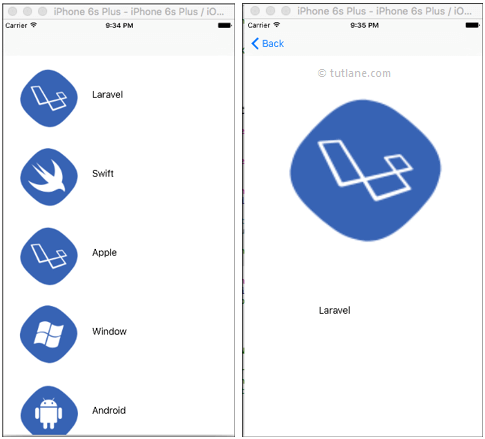 This is how we can use storyboards in iOS swift applications to implement different features in our application based on our requirements.